THE MAIN BUILDING Before the completion of the current main building, there was widespread concern that it was inappropriate for the president to use the residence once used by the Governor-General during the Japanese colonial era (1910-1945). Following such concerns, an advisory committee was set up during the Roh Tae-woo presidency to carry out the construction of a brand new presidential office and private residence.
The Main Building, which was subsequently completed in 1991, houses the private office of the President and other various function rooms.
The exterior design was based on the architectural techniques used in the construction of traditional wooden royal palaces. The hipped and gabled roof of the building is regarded as one of the most refined and attractive styles of Korean traditional architecture. It features lines converging at the crest of the roof in a triangle. The roof rises on a slant from the tip of eaves to join together at the crest of the roof, forming a hip.
The Main Building and its two annexes are covered with a total of 150,000 traditional Korean blue roof tiles(hence, the name “Blue House” is also commonly used when referring to Cheong WaDae). The blue roof tiles are well known for their unique color and their outstanding durability. Following procedures similar to that of making fine pottery, they last for over 100 years and do not become discolored.
The interior of the building features modern amenities and facilities, striking a balance between efficiency, modernity and tradition.
The President’s private office is located on the second floor. There are several function rooms and conference halls, including Jiphyeonsil where the President meets with her senior staff or at times holds summit meetings with other Heads of State. Other rooms include Inwangsil, a reception/dining hall and Baegaksil, a private dining hall for smaller meetings. Chungmoosil is used for press briefings following summit meetings or official dinners to honor foreign dignitaries. This is also where accredited ambassadors and heads of missions present their credentials to the President. 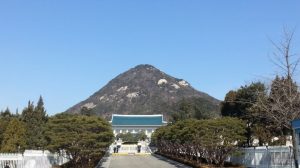 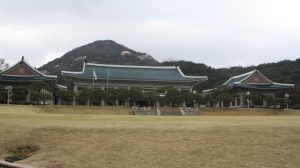 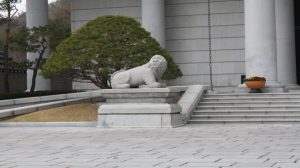 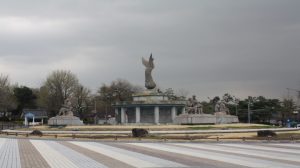 NOKJIWON (“GREEN GRASS”) GARDEN Surrounded by lush gardens, ponds full of exotic carps and more than 120 different types of trees, Nokjiwon garden is one of the most beautiful places within the Cheong WaDae compound. The garden was completed in 1968 and today there are commemorative trees planted by previous presidents to celebrate special occasions. However, the most impressive – and beautiful – tree is called bansong, or umbrella tree, located in the middle of Nokjiwon. The tree is 17 meters in height and is presumed to have been planted sometime around 1850. Four other pine trees growing straight up beside the bansong are called jeoksong, which is a variety of the red pine. In the old days, the site of Nokjiwon was a small farm where kings themselves cultivated crops in the hope that there would be a good harvest throughout the country. The President would host various outdoor receptions and lunches at the garden for the foreign diplomatic corps, domestic dignitaries and guests from abroad. Special occasions such as Children’s Day, Parents’ Day and Teachers’ Day are celebrated at the garden with outdoor picnics and receptions.
YEONGBINGWAN, THE STATE GUEST HOUSE Yeongbin-gwan was built in 1978. Before then, receptions for presidential guests were held at downtown hotels, causing much discomfort to the citizens and creating security hazards. The alternative was to build a guesthouse inside the Cheong WaDae compound. The building is supported by 18 granite pillars. The fine quality granite was quarried from Hwangdeung village in Jeollabuk-do (province). The interior walls of the building are decorated with traditional designs. The designs include the samtaegeuk, a circle divided by three interlocking comma shapes, the Rose of Sharon, which is the national flower of Korea, and the Wolgyesu, or Grecian laurel. The samtaegeuk circle is different from the yin and yang circle found in the Korean flag. The yin and yang circle is divided in two, but the samtaegeuk circle is divided into three. The three parts represent perfect harmony among the three entities of the universe: heaven, earth and human beings.