Directions
From Buyeo Intercity Bus Terminal, take a taxi to Busosanseong Fortress (부소산성). (5min)
RYE TOUR Information
We recommend you to walk from bus terminal since it takes only twenty-minute.

View Larger Map
Introduction
Buso Fortress (BusoSanseong)
At the north end of town, located on a bend in the Baengma River, is a small hillock. This small hill used to serve as the rear garden of the Baekje royal palace (long since destroyed), a northward defense position and, in times of war, an emergency palace where the king could remain protected behind the stone and earth walls-Buso Fortress-that ringed the hillock and its cliffs that plunged into the Baengma River.
Today, there’s not much left of the fortress or the palace facilities that adorned it, other than some earthworks and the foundations of old temples and pavilions. In more recent decades, some Korean traditional pavilions and other structures have been built on or moved to the hillock, including the Yeongillu pavilion, relocated to the fortress in 1964.
All in all, Buso Fortress (entry: 2,000 won) is a pleasant place to stretch your legs – the hillock is criss-crossed with paths that are pleasantly shaded by the trees of the forest that covers the park.
White Horse River Birch died off 3,000 cancer maid pictures
Nakhwa-am Rock
At the north end of Buso Fortress is a cliff that plunges into the Baengma River. Atop this cliff is a rocky outcrop that has come to be known as Nakhwa-am (“Falling Flower Rock”). This beautiful name alludes to the heart-rending and macabre tale associated with the site.
In 660, the southeastern kingdom of Silla, with its capital at Gyeongju, determined to end the warfare of Three Kingdoms Period, once and for all. Silla and its ally, Tang China, launched a two-pronged invasion of Baekje. The allied force, led by legendary Silla commander Kim Yu-sin and great Chinese general Su Dingfang (who would later earn glory expanding Chinese influence in Central Asia), defeated Baekje’s army (led by the tragically heroic General Gyebaek) at the Battle of Hwangsanbeol and laid siege to the royal capital of Sabi, modern Buyeo.
King Uija and the crown prince managed to escape to Ungjin,modernGongju, but the rest of the court took protection behind the walls of Buso Fortress. There was nothing the defenders could do, however, and the fortress fell. The SamgukYusa, an ancient history book, accounts that, rather than surrender themselves to the Silla and Chinese troops, some 3,000 court ladies leapt to their deaths from Nakwa-am, their fluttering robes resembling falling flower petals as they crashed into the waves of the Baengma River below.
The rock, capped by a pavilion built in 1929, provides an outstanding view of the broad, meandering Baengma River and the surrounding countryside. Definitely worth the time and effort to reach it.
Goran-sa Temple
Goran-sa Temple into people waiting in line on Just below Nakhwa-am Rock, overlooking the river, is Goran-sa Temple. A small Buddhist temple it may be, but what it lacks in size it makes up for in other enchantments. At the back of the main hall is a very famous mineral water spring where the water, according to legend, would make you younger. Nowadays, the water’s ability to turn back the clock is looked upon with skepticism in some quarters, but it’s nevertheless quite refreshing on a hot summer’s day.
Be sure to look at the wall murals in back of the main hall – especially the one telling the tale of the 3,000 court ladies who plunged to their deaths nearby.
Gallery   *Click images to enlarge 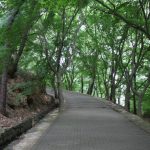 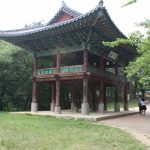 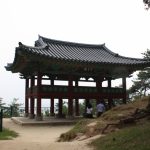 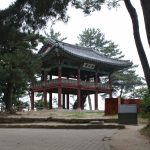 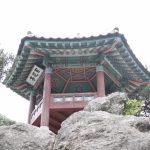 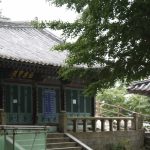 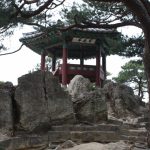 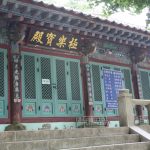 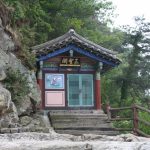 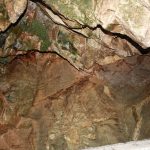 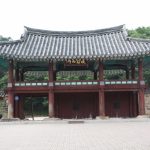