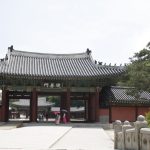 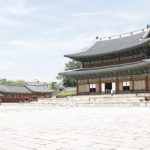 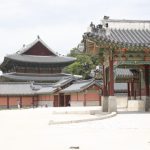 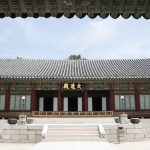 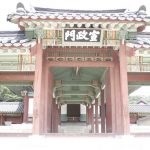 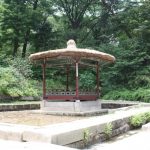 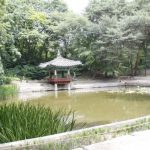 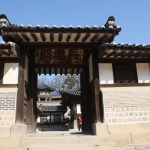 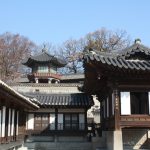 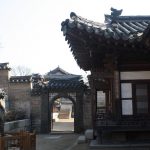 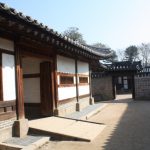 Located inside Changdeokgung Palace, Nakseonjae Hall is a one-storied structure built in ikgong style (bird wing-shaped eaves placed on top of the pillars) with a hip tiled and gable roof. It has 6 kans in the front and 2 kans to the sides (kan: a traditional unit of measurement referring to the space between two columns; roughly 2-4 meters). It originally belonged to the nearby Changgyeonggung Palace, but came to be considered a part of Changdeokgung Palace in more recent years.
The hall was constructed in 1846 (12th year of King Heonjong’s reign) and it is collectively called Nakseonjae together with the adjacent Seokbokheon Hall and Sugangjae Hall. The main gate of these three buildings is Jangnakdang, which consists of 12 kans of namhaenggak (south corridor building) at Nakseonjae. Upon entering the gate is an extensive yard leading to Nakseonjae. Of the 6 front kans, a single kan on the far right side protrudes out to the front to create a balcony-like loft. Meanwhile, the main building features an ordinary housing style with square foundation stones and pillars placed on top of a rectangular stone base. The furnace and the surrounding areas beneath the loft are marked by unique mosaic decorations of irregular lines and the kitchen doors feature diverse design patterns.
Donhwamun Gate – The main palace gate. Built in 1412, Donhwamun has a two-story pavilion-type wooden structure, and is the largest of all palace gates. Donhwamun was burned down during the Japanese invasion of 1592 and was restored in 1608.
Geumcheongyo Bridge – Oldest bridge still extant in Seoul. Built 1411.
Injeongjeon Hall (National Treasure) – the throne hall of Changdeokgung, it was used for major state affairs including the coronation of a new king and receiving foreign envoys. Originally built in 1405, it was rebuilt in 1610 after being burned down during the 1592 Japanese invasion, and a third time in 1804 after being destroyed by a fire.
Seonjeongjeon Hall – An office for ruling officials, the king held daily meetings with ministers, reported on state affairs and seminars here.
Huijeongdang Hall – Originally the king’s bed chamber, it became his workplace after Seonjeongjeon was deemed too small for conducting routine state affairs. The original Huijeongdang was destroyed by a fire in 1917. The reconstructed structure is completely different from the original due to recent Western influences. Wooden floorboards and carpets, glass windows, and chandeliers can be seen inside the building.
Daejojeon Hall – Official residence of the queen. Destroyed by fire in 1917, it was rebuilt with materials taken from Gyeongbokgung. Daejojeon was used as a residence for the last empress of Joseon, allowing us a glimpse into the final years of the royal household of the Joseon Dynasty.
Juhamnu Pavilion (Kyujanggak) – Royal libraries stood in this area. State exams were conducted in front of the pavilion on special occasions in presence of the king.
Yeon-gyeongdang Residence – Built in 1827, it was an audience hall modeled after a typical literati house.
Huwon
A small colorful wooden pavilion on a pond covered with lotus leaves
Buyongjeong Pavilion (pre-2012 restoration) and Buyeongji pond at the Huwon area
Behind the palace lies the 78-acre (32 ha) Huwon (후원, 後苑, Rear garden) which was originally constructed for the use of the royal family and palace women. The garden incorporates a lotus pond, pavilions, and landscaped lawns, trees, and flowers. There are over 26,000 specimens of a hundred different species of trees in the garden and some of the trees behind the palace are over 300 years old. The garden for the private use of the king had been called ‘Geumwon’ (금원, 禁苑, Forbidden garden) because even high officials were not allowed to enter without the king’s permission. It had also been called ‘Naewon’ (내원, 內苑, ‘Inner garden’). Today Koreans often call it ‘Biwon’ (비원, 秘院, Secret garden) which derived from the office of same name in the late 19th century. Though the garden had many other names, the one most frequently used through Joseon dynasty period was ‘Huwon’.
In September 2012, the Buyongjeong pavilion in the garden was re-open after a year-long restoration project. The pavilion was restored based on the Donggwoldo from 1820, National Treasures of South Korea No. 249.
A variety of ceremonies host by the king were held in Huwon. In early period of Joseon dynasty, military inspections participated with king himself had been practiced many times. King Sejo had troops parade and array before him or commanded them by himself in the garden. In addition, giving feasts, playing archery games, or enjoy fireworks in Huwon.
The Ongnyucheon (옥류천, 玉流川, “Jade Stream”) area is of particular interest. It contains a U-shaped water channel carved in 1636 for floating wine cups, with a small waterfall and an inscribed poem on the boulder above it. The area also contains five small pavilions.
World Heritage[edit]
Changdeokgung was added to the UNESCO World Heritage List in 1997. The UNESCO committee inscribing the site stated the place was an “outstanding example of Far Eastern palace architecture and garden design” being exceptional because the buildings are “integrated into and harmonized with the natural setting” and adapted “to the topography and retaining indigenous tree cover.”
Portions of the palace were used to film the hugely popular Korean drama Dae Jang Geum in the first decade of the 21st century.