Cheonggyecheon (Hangul: 청계천) is a 10.9 km (7.0 miles) long, modern public recreation space in downtown Seoul, South Korea. The massive urban renewal project is on the site of a stream that flowed before the rapid post-war economic development required it to be covered by transportation infrastructure. The $900 million project initially attracted much public criticism but, after opening in 2005, has become popular among city residents and tourists. Click here if you want to know more detail.

View Larger Map
Description
Geography
Cheonggyecheon is an 8.4 km creek flowing west to east through downtown Seoul, and then meeting Jungnangcheon, which in turn connects to the Han River and empties into the Yellow Sea. During the presidency of Park Chung-hee, Cheonggyecheon was covered with concrete for roads. In 1968, an elevated highway was built over it.
History
In July 2003, then-Seoul mayor, Lee Myung-bak initiated a project to remove the elevated highway and restore the stream. It was a major undertaking as not only did the highway have to be removed, but as years of neglect and development had left the stream nearly totally dry, 120,000 tons of water were to be pumped in daily from the Han River, its tributaries, and groundwater from subway stations. At that time, safety problems also occurred due to the deteriorated concrete construction. Despite this, restoration of Cheonggyecheon was deemed important as it fit in with the movement to re-introduce nature to the city and to promote a more eco-friendly urban design.
The restoration of two historic bridges, Gwangtonggyo and Supyogyo, was also a contentious issue, as several interest groups voiced opinions on how to restore historical and cultural sites and remains, and whether to replace the bridges or not.
The Cheonggyecheon restoration project had the purpose of preserving the unique identity of the natural environment and the historic resources in the CBD of Seoul, and to reinforce the surrounding business area with information technology, international affairs and digital industries. The plan also encouraged the return of the pedestrian-friendly road network connecting the stream with traditional resources, e.g. Bukchon, Daehangno, Jungdong, Namchon and Donhwamungil. This network system, named the CCB (Cheonggyecheon Culture Belt), tried to build up the foundation of cultural and environmental basis of the city
Achievements
The project attempted to promote the urban economy through amplifying urban infrastructure for a competitive city within the existing business and industrial area centered on the stream. The Urban renewal project was the catalyst of revitalization in downtown Seoul. Cheonggyecheon became a centre for cultural and economic activities.
Cheonggyecheon restoration work also brought balance to the areas both in south and north of the stream. During the modernization era, downtown Seoul was divided into two parts, north-south, based on their features and function. The restoration helped to join these two parts in order to create a new urban structure connecting the cultural and environmental resources in northern and southern areas of the stream (Hwang n.d.), resulting in a balanced and sustainable development of northern and southern areas of the Han River.
The project resulted in a speeding-up in traffic around the city when the motorway was removed. This has been cited as a real-life example of Braess’s paradox.
Gallery   *Click images to enlarge 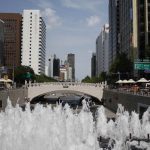 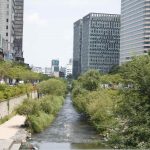 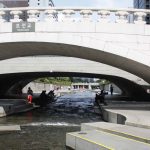 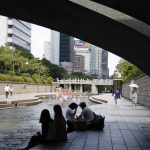 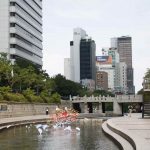