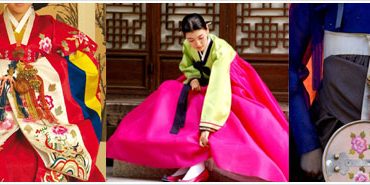 The Hanbok is the traditional outfit of the Korean people. Koreans nowadays wear this outfit only on festive days or special anniversaries, however it was worn daily up until just 100 years ago. It is a kind of traditional formal dress and most Koreans keep a hanbok for these special times. Children wear hanbok on their first birthday and adults wear it for their wedding ceremony and on their 60th birthday. The hanbok is also worn for funerals or religious services, and is still used as casual wear in villages or districts where the traditional ways of life are still maintained such as Chunghak-dong on Mount Jirisan.

One way to refer to Korea is ‘the people in white’, which refers to the fact that the Korean people often wear white or similar tones. Koreans have long worn white clothing made of hemp or cotton regardless of their status. The case of formal dress was different, however. Color and design were typically luxurious and the hanbok was particularly highly valued for its gracious and subtle colors. Modern designers have presented the traditional Korean costume at renowned cities of fashion such as Paris and New York.

The hanbok is colored using natural dyes. The colors of nature are imbued in the cloth. For example, red dye is obtained from the petals of red flowers. The color pigment is extracted by grounding the petals in a mortar, putting them in a jar and rinsing them with hot caustic soda. It is a very slow, complicated, precise process. The colors obtained in this way differ greatly from artificial dyes in their color and depth. The Hanbok is creative and emotional in its design. One Korean phrase regarding the shape of the outfit is the ‘upper is narrow, lower is wide’. The jacket must be tightened and the skirt relaxed, as was the silhouette of the women’s hanbok in Joseon times. The tightly fitting jacket attractively reflects the shape of the upper body. The wide sleeves and flexible skirts enhance the wearer’s gracefulness by hiding the physical features of the lower body.

The principles behind the creation of the hanbok can be explained by the movement from 2 dimensions to 3 dimensions. The flat cloth is patterned, cut, and sewn in 2 dimensions but the subject wearing the hanbok is a 3 dimensional being. The hanbok is frilled or fastened with string to enhance the 3D affect. The unique line of the hanbok is created from this process. The lines of the hanbok costume are as smooth as the curves of the eaves of tiled roof house and as sharp. An old adage says that you can tell the man by his clothes.

Koreans have traditionally lived as one with nature, and obtained all material from natural sources for making cloth and coloring it. Koreans favor smooth curves rather than straight lines and that has added a gracious line to the hanbok. A common comment that every hanbok designer gets is that the outfit is more beautiful when it is worn than when it is on the hanger, and more beautiful when moving than when standing. Indeed, the unique lines of the hanbok appear at their greatest when the wearer is in motion.

Although hanbok have become the ritual dress of choice worn only on traditional holidays, Koreans’ love for hanbok is tremendous. The popularity of Korean classic dramas is causing many foreigners to take a keener interest in traditional Korean attire as well.

[Hanbok in the 16th Century]

[Headgear and Accessories Worn Together with Hanbok]