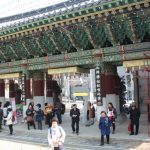 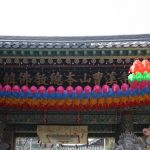 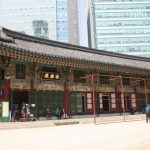 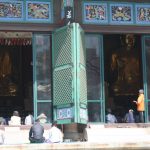 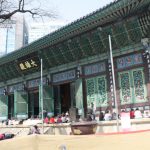 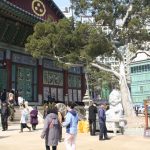 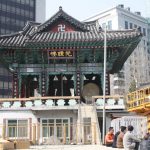 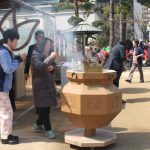 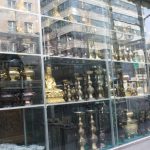 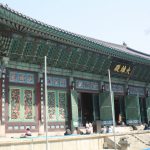 Jogye Temple is chief temple of the Jogye order which represents the Korean Buddhism. It promotes embodiment of society where people live together and Bodhisattva’s spirit. Also,  the temple is a historic site that has lived through the turbulent modern history of Korea.
Jogye Temple was originally built in 1910 and bore the name of Gakhwangsa Temple by the monks longing for independence of the Korean Buddhism and recovery of Koreans’ self esteem.
Gakhwangsa temple was the chief temple of modern Korean Buddhism and the first propagation center that argued legitimacy of local Buddhism and the first temple  located inside the boundary of four gates of the city of Seoul.
Name of the temple changed to Taegosa in 1938 and again to present  Jogye Temple in 1954 in order to clear away the vestiges of Japanese colonial era.
Jogye Temple locates within the heart of Seoul, where the public can enjoy rest and leisure time. The temple is well positioning itself as the chief temple of the order through remodeling of the Main Hall and construction of the One Pillar Gate.
It is also leading devotional practices, religious and public welfare activities.
The Main Hall is opened 24 hours a day to all public allowing visits of both local and foreigners. It is promoting itself as a open space, inviting all to the temple’s events and ceremonies.
Daewoongjeon, if translated word-to-word, means place for grand hero who has overcome the limits of human being.
Daewoong is the virtuous name of Buddha and Daewoongjeon means the house of enshrining the Surkgahmohnee Buddha, Daewoong of heaven and earth.
Generally, when Amitabha Buddha and Medicine Buddha are place together
in right and left side of Daewoong as in case of Jogye Temple, it is called as Daewoonbojeon, to show that it is higher class than Daewoongjeon.
However, the Main Hall of Jogye Temple has been named as Daewoongjeon as it housed Surkgahmohnee Buddha only at the time of foundation.
It is keeping its original name of Daewoongjeon even after adding the Buddha Triad (Surkgahmohnee Buddha, Medicine Buddha, Amitabha Buddha) in 2006.

8 Sides 10story Pargoda
On August 20, 1913, Dharmavara, the Srilankan monk, visited Korea (then Chosun Dynasty) durin g his worldwid e h o ly pilgrimage and donated one Jinsin-sari (sacred relics of the Buddha) to the local Buddhist community.
In 1930, Kyung Ho Keun, the head monk of Jogye Temple built 7 story stone stupa to enshrine the relic in it.
The stupa was moved to front of the Main Hall of the temple in 1937. However, a new 8 angle 10 story stone stupa was built to enshrine the relic just before the 100th anniversary of Jogye Temple embracing some critics that the previous stupa did not match the scale of the temple and also was built in Japanese style.
The 8 angle of the newly built stupa symbolize the noble eightfold path and the 10 story stands for ten wholesome actions.
Jogye Temple, located in downtown of Seoul, serves a open Buddhism Zen seminary for the public as well as the traditional cultural sanctuary preserving and handing down important cultural assets from Chosun Dynasty.
The monument was built to engrave historical events of the modern history of Korean Buddhism.
The Jogyesa Temple Historical Monument
The Jogyesa Temple Historical Monument celebrates the history of Jogyesa Temple and the Jogye Order.
The history entails the successful revival of Korean Buddhism and the overcoming of great trials such as the oppression of Buddhism during the Joseon Period, Japanese Colonization, and the confusion of the modern era.
In addition, there is an aspiration prayer inscribed on the monument for the light of dharma (truth) to widely shine forth.
This monument stands at 7.25 meters to match the scope and stateliness of Jogyes a Temp le. A tot al of 8529 characters have been inscribed on a single plate of flawless stone.  This monument was inaugurated on the s ame day as the 10-story stupa, October 8, 2009.
Hall of Pure Land(Geungnakjeon)
Paradise Hall is for Amitabha (or Amitayus) Buddha who leads beings to Paradise (Western Pureland) where he resides. He is the central figure with KwanseumBosal (Avalokiteshvara) and JijangBosal  (Kstigarbha) to the left and right. This hall can also be called Amitajeon (Amitabha Hall) or Muryangsujeon (Hall of Infinite Life) or Sukwangjeon (Hall of Light and Life).
At Jogyesa Temple, this hall is used for dharma talks of a smaller scale, ceremonies, and prayer services.
Bell Pavilion
The Brahma Bell Pavilion is where the four temple instruments of Dharma Drum, Wooden Fish, Cloud Gong, and Brahma Bell are kept. These instruments are played in succession, before the morning and evening chanting, as well as for special occasions.
The Dharma Drum is sounded to save all being on the earth, the Wooden Fish is sounded to save all being in the water, and the Cloud Gong is sounded to save all flying beings in the air including spirits which abide in space. The Brahma Bell is rung 28 times in the morning and 33 times in the evening to sound the dharma (truth) to all beings in the worlds and save them from suffering PinusBungeana(Natural Monument No.9)
Within the Jogyesa Temple compound stands a rare Lacebark Pine. This tree matures slowly and has a low reproduction rate; making it a rare species.  It has a distinctive white bark. It is presumed to be over 500 years old. It is 14 meters tall with a base circumference of 1.85 meters.
The tree has received good care over the many years and it is such a marvel of nature that it was designated by the Korean government as a Natural Monument on  December 3, 1962.
When Jogyesa Temple (then Gakhwangsa Temple) moved to the current location, this tree was also moved.  The name of the neighborhood of its original place is called Susongdong, apparently named after this type of pine.