The JSA
The JSA resembles a square measuring about 800 meters in diameter. After the Armistice Agreement was signed, the JSA became a neutral location where the guards from both sides were allowed to move about freely. It was the only place in the DMZ where the MDL was originally not cleared marked. That changed after North Korean guards murdered two UNC officers with axes on 18 August 1976. After the Ax Murder incident, the MDL was marked within the JSA, and that marking system continues until today. Today, the only place where border crossings are allowed is inside the conference buildings of the Military Armistice Commission(MAC).
The MDL in the JSA is marked with one hundred and twenty-six 1 meter-high white stakes, along the boundary line a 10-meter interval. In the rest of the DMZ, the boundary is marked with MDL Markers. Each side owns six guard posts in the JSA and on more than thirty-five armed guards can be present on each side. The JSA is a venue for exchanges and negotiations between the North and South. All kinds of political and economic issue, cultural conferences and Red Cross meetings are held in the JSA.

Panmunjeom
Panmunjeom is located inside the Demilitarized Zone (DMZ), and it is the most forward location in the DMZ that can be visited by civilians.
The administrative address is Kyunggi-do Paju-si Jinseo-myun Neolum-li (for the South Korean portion), and Kaesung-jikhalsi Panmun-joon Panmunjeom-ri (for the North Korean side).
Although Panmunjeom is the common name of the area, the official name of the negotiating site is the Joint Security Area (JSA).
Panmumjom is located in the western portion of the 155-mile long DMZ on the Military Demarcation Line (MDL) and it demonstrates the great sorrow of the divided country.
Panmumjeom is located 62 kilometers northwest of Seoul, the capital of South Korea, and 215 kilometers south of Pyongyang, the capital of North Korea, 10 kilometers from Kaesong. Panmun Gak
Panmun Gak is the main building managed by the North Koreans in the JSA. It is located about 80meters north of the Freedom House. It was constructed in September 1969 and is used as an office and command post for the North Korean guard force and as a stand by room for MAC meeting attendees. It is also used as a place for propaganda and instigation activities directed against the South. Every August 15th, a mass propaganda rally is held in front of this building under the name of the “8.15 Pan-National Rally”.
The “Bridge of No Return”
The “Bridge of No Return” is located at the west end of the JSA and is bisected by the MDL. In front of the “Bridge of No Return” is also where the tragic Ax Murder Incident occurred in 1976. Before the incident, the “Bridge of No Return” was the only pathway connecting North and South. Currently the bridge is blocked off with a wall on the North Korean end. Today, that route goes via the “72 Hours Bridge”. The Brige is called the “72 Hours Bridge” because North Koreans built it in three days. The “Bridge of No Return” got its name from the prisoner repatriation operation after the Armistice Agreement was signed . The prisoners were exchanged across this bridge and given a choice to either cross the bridge to return to their original country or to remain on the side of their captors. However, once they crossed the bridge, they were not allowed to cross back to the other side and hence the name the “Bridge of No Return”. The numbers of the prisoners exchanged from 5 August to 6 September 1953 were 13,444 UNC and 82,493 Communist troops. The guard posts on each side of the bridge were the setting for the popular korean movie “JSA”.
Gallery   *Click images to enlarge 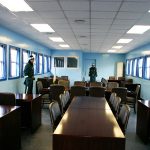